April is such a wonderful month. It’s the time of the year when nature awakens again, when the sun starts to shine more often, when the warm winter coats are disappearing, you can see daffodils everywhere. April in London is especially magical – if you live here, you know what I mean 🙂

April is also the month of one of the most important and most amazing sport events of the year – the London Marathon. 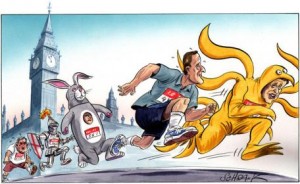 The current London Marathon was founded in 1981 by former Olympic champion and journalist Chris Brasher and athlete John Disley.  Shortly after completing the New York City Marathon in November 1979 Brasher wrote an article for The Observer newspaper which began:

“To believe this story you must believe that the human race be one joyous family, working together, laughing together, achieving the impossible. Last Sunday, in one of the most trouble-stricken cities in the world, 11,532 men and women from 40 countries in the world, assisted by over a million black, white and yellow people, laughed, cheered and suffered during the greatest folk festival the world has seen.”(1)

Inspired by the people of New York coming together for this occasion, he asked “whether London could stage such a festival?”(1) Within months the London Marathon was born, with Brasher making trips to America to study the race organisation and finance of big city marathons such as New York and Boston, the oldest in the world. He secured a contract with Gillette of £50,000, established the organisation’s charitable status, and set down six main aims for the event, which he not only hoped would echo the scenes he had witnessed in New York, but also put Britain firmly on the map as a country capable of organising major events.The first London Marathon was held on 29 March 1981, more than 20,000 applied to run. 6,747 were accepted and 6,255 crossed the finish line on Constitution Hill. (2)

A record number of 247,069 people have applied for a place in the 2016 Virgin Money London Marathon following the decision to keep the online ballot application system for 2016 open for five days.

The race will take place in less than 3 weeks on the 24th April 2016 and as a running enthusiast, I cannot wait to cheer all those amazing people who chose to give up lots of free time and undergo a really hard training period and challenge their limits both physically and mentally.

They all have their stories, their “Why?”’s and this race is such a wonderful example of humanity, comradeship and the positive power of supporting and encouraging each other. Peace and unity.

If you’re in London on that weekend, make sure you go out there and cheer those crazy amazing people – they will so appreciate it, it will help them fly.

Having run 3 half marathons myself I have experienced how great those high fives from kiddies and cheering from anyone are.

As a nutritionist I had the great privilege to give a talk and nutrition tips to the fundraisers for my favourite charity – The British Red Cross on the 5th April in the Virgin Money Lounge. After my presentation we heard an experience from a lovely finisher from last year, about the truly remarkable and very much needed work the British Red Cross do – examples of how far the fundraisers efforts go and we all learnt some breathing relaxation techniques and easy and safe yoga poses to stretch and recover pre and post the event.

Sport nutrition is one of my favourite topics, so if you’d like to improve your performance, signed up for a race (let it be running, cycling, cross fit etc) or just wondering how to support your exercise regime with good nutrition and you’d like to make sure you’re fuelling properly for maximum performance and quick and efficient recovery, please get in touch.

If you are running the London Marathon this year, massive respect and wishing you best of luck!